The Operating System is Disappearing

I believe the free software community is at risk of missing a large step in the evolution of software: the disappearance of the OS (operating system). I currently express this idea in a series of conferences around Europe and thought a written article would be a good complement.

Typically, a computer installation will look just as below. 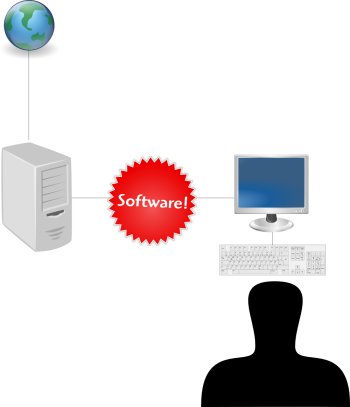 All at the bottom is the common user, Joe, who uses his computer with some kind of interface (screen, keyboard, mouse). The middle box is the hardware, which is connected to a remote Internet (top).
The software sits between the interface and the hardware. This is what we are good at doing. The Linux operating system is probably the most remarkable way for Joe to do things with his hardware. From office work to 3D animation, through graphic design and web surfing, there probably isn’t much that free software can’t do. It has taken years of work for us to get there, and we rightly take pride in the result.

The problem is, this is how things were in 1999. The software world has changed — and if you’re a Gmail or Flickr enthusiast, you may have a hint already.

A new picture for software

In 2007 Joe is still here, but this time the picture is a lot more unclear: 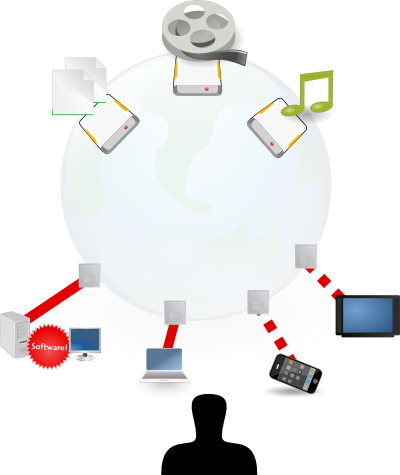 The most striking difference is that the Internet, previously a nice-to-have commodity, has into a giant, indispensable element. Second, Joe does not simply have one desktop computer, but owns or uses a variety of networked devices.

And lastly, Joe’s personal files, in addition to the movies he watches and the music he listens to, are increasingly stored on remote internet servers.

Does your favorite Linux distribution suddenly feel a lot smaller here? Let us look at the problem a little closer.

The rise of software all around ourselves in our consumer-frenzy-driven portion of the planet, is inexorable. Software is convenient, it’s efficient: we throw it in every device around. TVs, phones, cars, music devices, GPS — they all have some, carrying ever more of our information and culture.

So far, the traditional PC is the only of these where on will easily find free software. For the free software community, adapting to this variety of devices and hardware will require a lot of time, effort and support.
This is, however, the obstacle we will most easily overcome. I trust the amazing code-writing and adaptive abilities of the developers out there. For example, the Firefox and Ubuntu communities are already making efforts to adapt to “mobile platforms” with the first results likely being released in 2008.
It still remains that every time we use one of these devices, hidden code and legal restrictions are running over our data.

Running pieces of proprietary software inside everything you touch is not as scary as another trend we are witnessing: the surge of Internet-based services.

Years of software development work and industry standardization have made it possible for free software to read just about any video camera you plug into your computer. But typically now, within one minute, the file is uploaded to Youtube and disappears into a server black-box, to be streamed again in a proprietary protocol every time the user wishes to view it.
This is but one of many such occurrences: the email protocol is open and easy to implement, but most of it is now done on private, highly convenient but fully closed systems (Gmail comes to mind). Photos are uploaded to Flickr-like centrals where the management, commenting, tagging, all happens within proprietary systems. There isn’t, in fact, any area –from accounting to calendaring and social networking– where one can’t find a popular web application that does it in a sexy way — albeit all with proprietary software.

Are these services “eating up” our software? What could be happening is that the content of our computers is escaping from us. Our free-software-powered PCs could become stylish display devices, while the real software, the one dealing with our writings, media, work and culture, would be run on black-box remote servers. Stylish terminals, and remote streaming computers: not much of an exciting prospect.

The operating system is not disappearing from a technical viewpoint –we will always use software to run the chips inside our machines. It remains, however, that the most sensitive parts of this software (the ones with which we access and create our culture) are increasingly transfered online.

How exactly the free software community should deal with it, is not obvious. Perhaps wondering and understanding what attracts so many of us to Gmail1 is the best way to start.

the next article is called it’s not the Internet anymore and looks more into the nature of our network usage.